I’ve been gone for quite a while due to a few big changes. I have a giant cup of pitch-black coffee in front of me, and Die Antwoord has been playing on loop all morning, so…I guess I’m ready to open up. If you’re seated in the splash zone, watch out for blood–here comes Gallagher’s hammer. 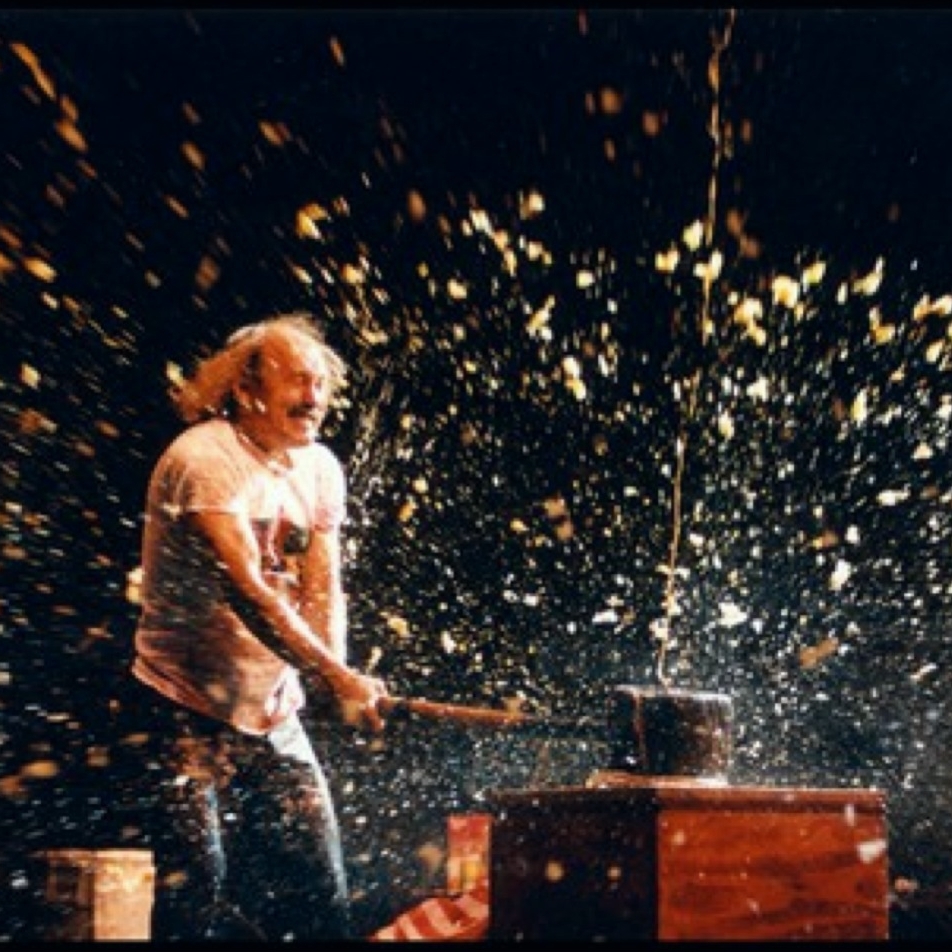 Starting with the good changes: I’ve booked a few events over the next few months throughout Ohio, and I’ve been finding new and interesting ways to shamelessly plug my novel Birthday Girl. I don’t want any of these events to be just another book sale; I’m an entertainer first and foremost, so I’ve been busy working with smarter people to create something special that goes beyond simply reading chapters from my book.

One of these ideas has been an audio “performance” of Birthday Girl, something I’d make available for purchase only at live readings. I don’t mean just an audio book, either. I’m pulling together some talented friends of mine to create something that can be enjoyed in addition to physical copies of the book, a super-fucked-up radio opera that’ll make your headphones ooze blood.

As ambitious as this project is, it’s also expensive and takes a lot of coordination. I’ve never directed a film, but this likely entails a similar amount of work (apologies to any film majors reading this; I don’t mean to discount the insanity you go through). I’m aiming to release this next Summer (2020), but that’s all up in the air. 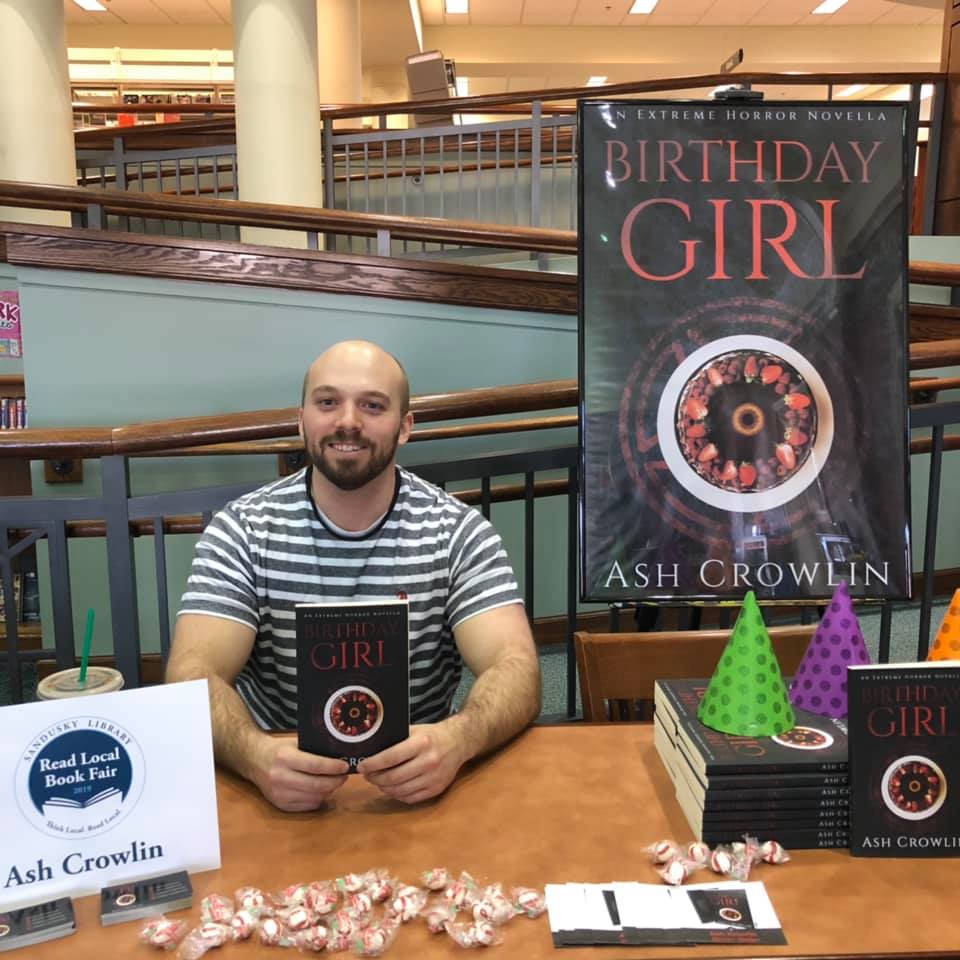 My most recent author event was this past Saturday (April 6) at The Sandusky Public Library. Dozens of local authors were able to market their work for a few hours, and the community turnout was pretty amazing. A lot of interesting people stopped by my table and talked with me about all things ranging from horror movies, the writing process (my process: write), college majors, and experiences with troublesome ghosts.

My sales table was assigned to the children’s room…which is literally the weirdest location in the library to market a book filled with gratuitous violence and Cronenberg-ian body horror. There were several other author tables in the room with me, and a few of them got a kick out of listening to me give an elevator pitch to potential buyers (“Yes, ma’am, it certainly is a children’s book…if your child is Michael Myers or Rosemary’s Baby.”)

Surprisingly, my sales table did pretty well, much better than I anticipated. I’ve always known Sandusky was filled with great people, but I never imagined there were so many horror fans. If you’re one of these kindred spirits, I fucking love you and thank you for your support 🙂

My next event is at The Ination 20th Anniversary in Bowling Green, OH on Wednesday April 24th. The Ination (or, “goth night”) has become a bigger and bigger part of my life over the past few years. There are so many good people there, and it’s the best place to be if you’re any kind of social misfit. I will have a vendor table set up from 8 p.m. to 2 a.m., and there will be several other amazing artists selling their wares throughout the club. I strongly encourage you to check out this event…because it may be the final Ination event ever. The fact that you’re visiting this page tells me you’re probably a fan of creepy things, so you’d be doing yourself a disservice by not checking out The Ination Fan Page on Facebook or watching this event trailer. They were kind enough to include my book trailer for Birthday Girl at the end of the video, so there’s another good reason to check it out.

So, there’s some of the good things that have been keeping me from the blog.

Now, on to the not-so-good things…

My little brother passed away on March 14th after almost a full year of battling cancer. When I say “battling cancer,” I don’t just mean getting chemo therapy and praying for a miracle. He went through ten shades of Hell, lost use of his legs, and he still managed to keep a positive attitude the entire time. He showed us all how strong a 20-year-old kid can be, all the way to the end. I’m not going to go into how painful this has been for my family, because words really can’t do it justice. If you’ve ever lost someone close, whether it be a friend, a brother, a parent, or even a great-grandparent, you have an idea how loss feels. I imagine the pain is particular to the individual, so I won’t pretend to know your pain, either. For me, it comes in tidal waves. It stops hurting for a full day, or sometimes a few days at a time, and then I wake up at 4 a.m. with a feeling like an iron fist in my chest, and I don’t go back to sleep because I know that I’ll only dream of those days leading up to his death. That’s some heavy shit to share, I know…though I did kinda warn ya.

Let’s wrap this post up with a positive change.

Oh, hey, I have two books coming out over the next year. Boom; positive news.

One of these books is Birthday Girl: Coronation, the second book in a planned trilogy. I don’t have any details to share yet about the plot, the exact release date, or which characters are returning, but I can tell you it’s a different sort of fucked-up from the first book.

The second book I’m releasing is Moving Through. I’m anticipated a September release date, but that could change. This isn’t a horror book at all, though it coincidentally does have a lot to do with the loss of a loved one. I wrote it when I was in high school, spent a few years editing it, and ended up putting it away for a few more years. Now feels like a good time to put it out into the world. It’s actually been therapeutic. Being that it’s not a horror book, I’m not releasing it under the name Ash Crowlin. But more on that later…

Keep an eye on this page; lots more news coming over the next few months.

One thought on “Return of the Mack (A Pleasant Bummer)”

Published by Chase Will

View all posts by Chase Will